Mandy Kahn is a poet and peace advocate based in Los Angeles.

Kahn is the author of two collections of poems—Glenn Gould’s Chair and Math, Heaven, Time—both from London-based poetry press Eyewear. Her work has been included in the Best American Poetry anthology series, and in former Poet Laureate Ted Kooser’s syndicated column American Life in Poetry.

In addition to writing books, Kahn regularly presents immersive poems: live works of literature that incorporate performance, audience participation and musical technique. In 2019, Kahn presented a program of immersive and interactive poems at the Getty Museum; her Getty presentation was called “Gateways to Peace,” and was performed by a cast of seven actors and three opera singers.

Kahn is the Writer-in-Residence at the Philosophical Research Society, a center for spiritual discourse founded in 1934 by wisdom scholar Manly P. Hall. She teaches a free, weekly online class on the nature of peace for the PRS called Peace Class, and regularly presents peace-building concerts on the grounds that features poetry, classical music and immersive performance.

She is the subject of Courtney Sell’s feature-length documentary “Peace Piece: The Immersive Poems of Mandy Kahn,” which was released by Indie Pix, and is available for streaming on Amazon Prime Video, Google Play, and elsewhere, and is also available as a DVD.

She has given readings at Cambridge University, the London Review Bookshop and Shoreditch House in the UK, at Motto in Berlin, at Colette in Paris, at Davies Symphony Hall in San Francisco, at the New School in New York, at the Barrick Museum in Las Vegas, and at many venues in Southern California.

Kahn has been interviewed by BBC Radio, the Los Angeles Review of Books and Flaunt magazine, among others, and she is the recipient of the 2018 Shakespeare Prize in Poetry. The Shakespeare Prize is awarded annually to a poet or playwright based in the county of Los Angeles; other recipients include Tom Stoppard, Ray Bradbury and Dana Gioia.

Kahn is part of the Peace Quartet, a group of four peace advocates that speak as a group. In the quartet, she’s joined by Dot Maver, co-founder of the National Peace Academy and the Global Silent Minute, Fumi Johns Stewart, Director of May Peace Prevail on Earth International, and Michael Lindfield, Board President of Meditation Mount.

Mandy Kahn lives in Los Angeles, where she was also born and raised. She holds a B.A. in English from UC Berkeley and considers herself profoundly Californian.

Mandy presents an immersive villanelle at the Getty Museum

Mandy's program "Gateways to Peace" at the Getty Museum

Flyer for Mandy's event at the Getty Museum 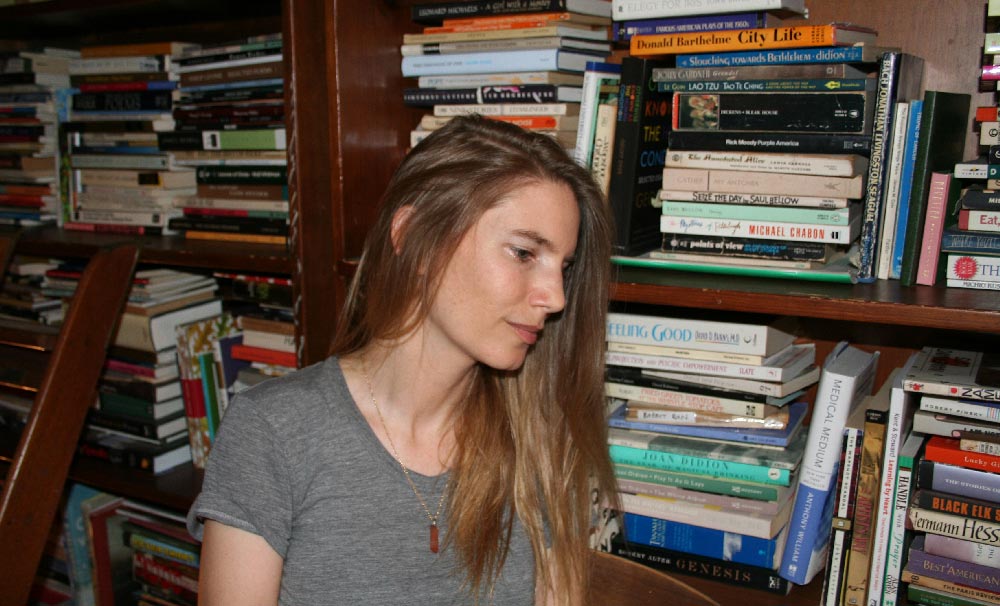 To request an interview with Mandy, or to hire her to speak at your event, please email media@mandykahn.com